Reader SHANEY THOMAS wrote to Thislife Online to motivate our readers with her story. At 10, she was in a car accident that left her with lifelong physical challenges. How does she rise above them and see herself as ‘perfect in my imperfections’? She told NANINE STEENKAMP 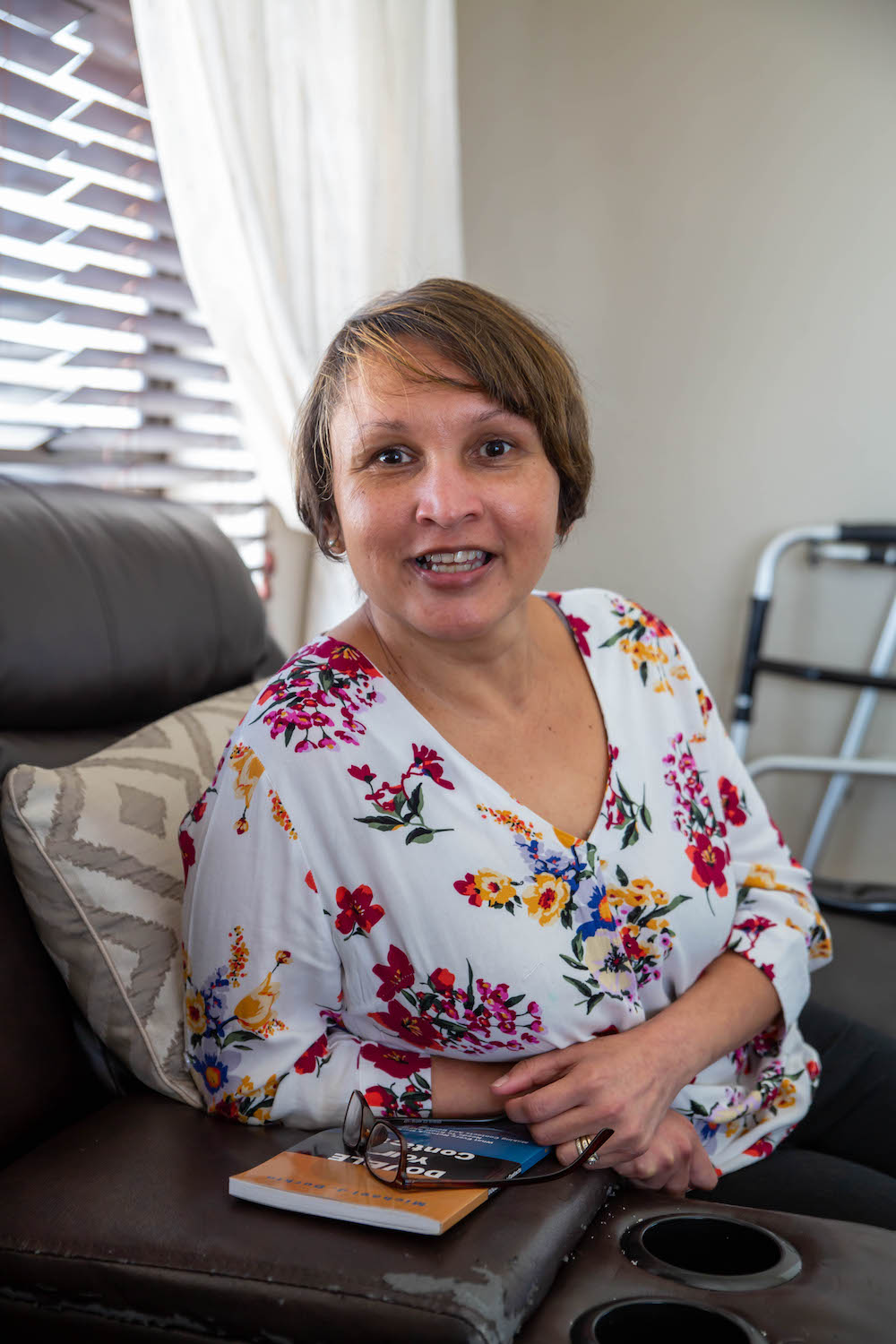 Reader Shaney Thomas: ‘I’ve realised I don’t have to look good for people, but my soul has to be right from within’  |  Photo: Ronelle de Villiers

Shaney (43) grew up in Lansdowne, the daughter of a financial advisor and a homemaker. She attended Eros high school in Athlone and has since worked as an administrator in a number of corporate jobs. She lives in Kenilworth with her husband Julian and sons Jared (15) and Luke (10)

I WAS ON A SURPRISE HOLIDAY with my family when a 21-year-old drove into our car near the Storms River bridge.

Minutes before the accident, we stopped at a petrol station and just before falling asleep I glanced at Dad, never realising this was my final sight of him alive. He died on the way to the hospital. 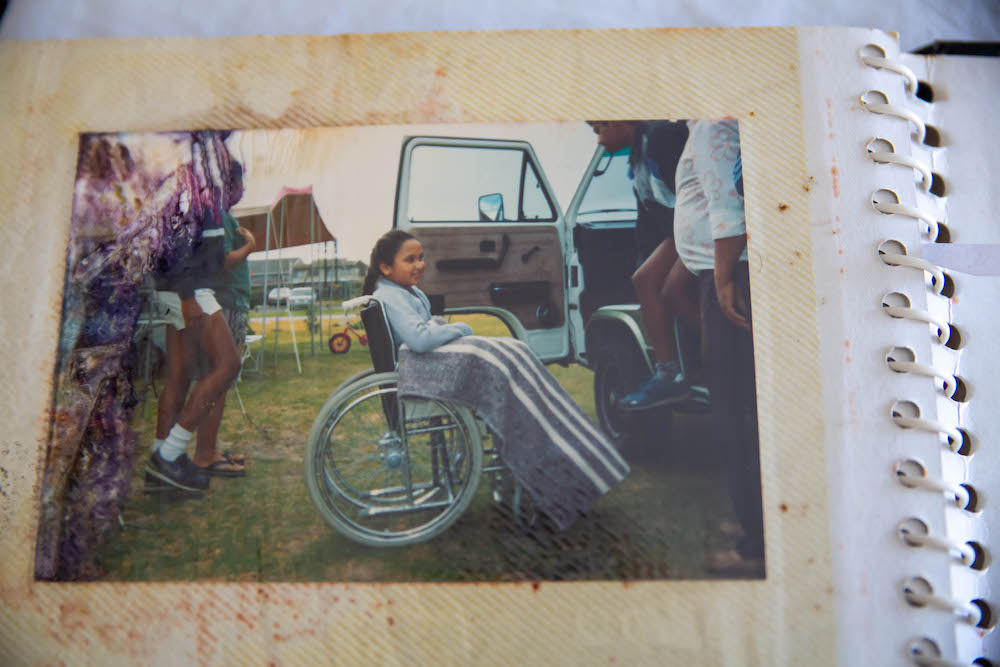 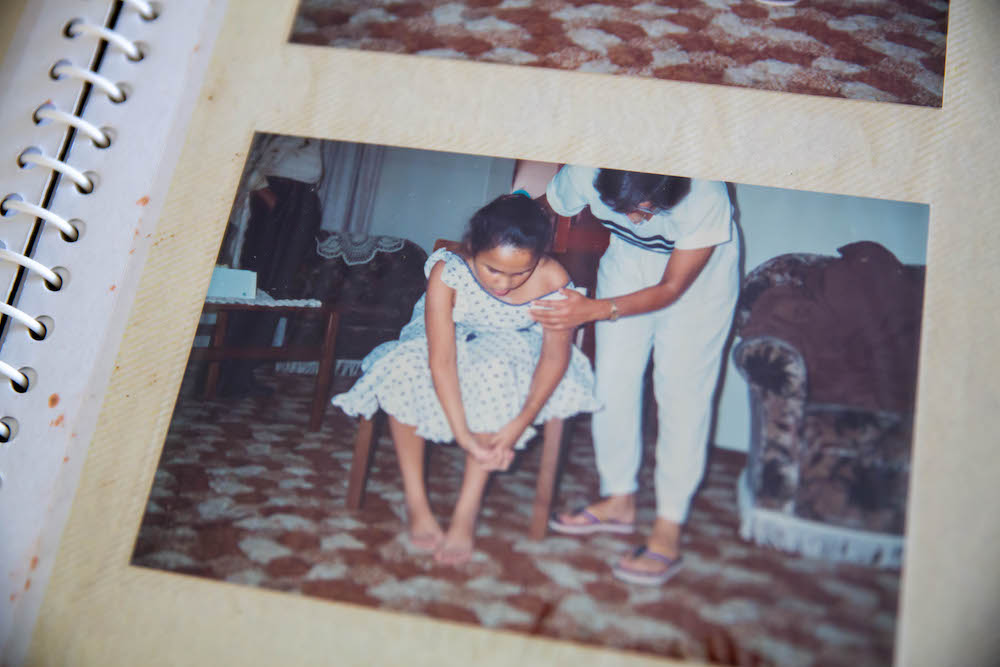 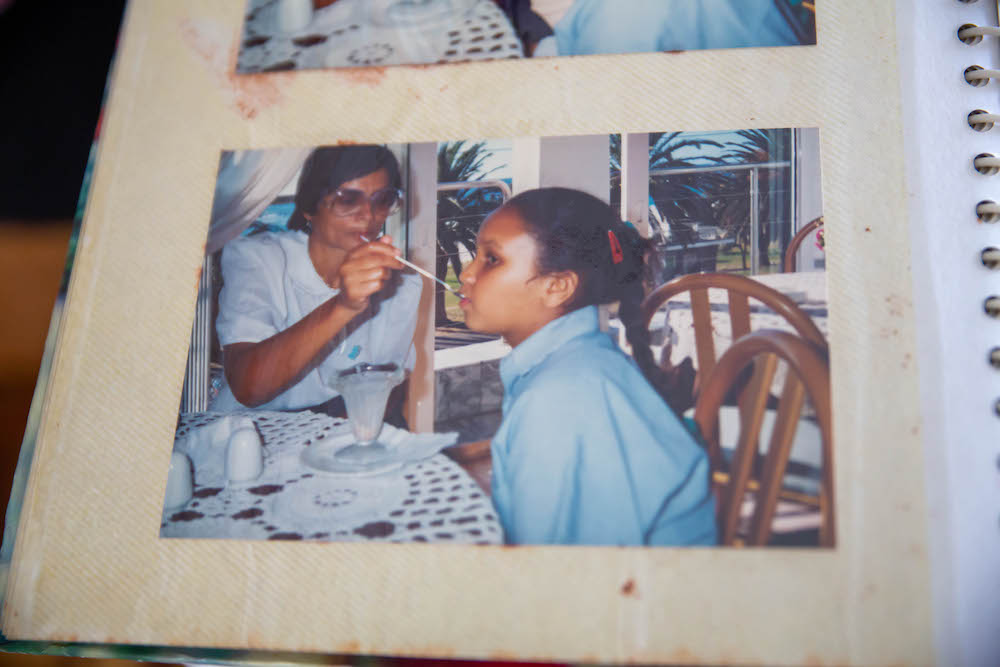 The ‘family archives’. A holiday car crash that killed her father left a 10-year-old Shaney Thomas with devastating injuries. Doctors said she would never be able to look after herself. But… she proved them wrong!

I woke up out of a coma a week later in a hospital in Port Elizabeth with Mom sitting at my bedside, crying. After three weeks I was flown to City Park Hospital in Cape Town and Mom told me Dad had ‘gone home’.  I wondered why was she crying, because I thought he’d gone home to be with his mother. It was only when I saw the memorial service pamphlet that I realised he was no longer alive. I was 10 years old.

The accident had injured my brain, and I was in hospital for a month. I couldn’t talk, walk or move my left arm, and had to move around in a wheelchair. My right eye, arm and side were also damaged. The doctors said I would never be able to take care of myself.

However, I proved them wrong! Slowly, thanks to exercises with an occupational therapist and then at a gym that I joined, I started walking again. I finished high school through Cape College, then studied tourism at Boston College. I walked, swam and even ran: everything a normal person would do!

My first job was at the head office of Edgars clothing store and, a year later, I started a new admin job where I met my husband Julian, who swept me off my feet. He spoilt me a lot and was always telling me how he admired me. We married in 2005 and I gave birth to our first-born, Jared, a year later. I’d been told I’d never have kids but I was determined to prove this wrong. Being at home with Jared for a year before going back to work was my best year ever. 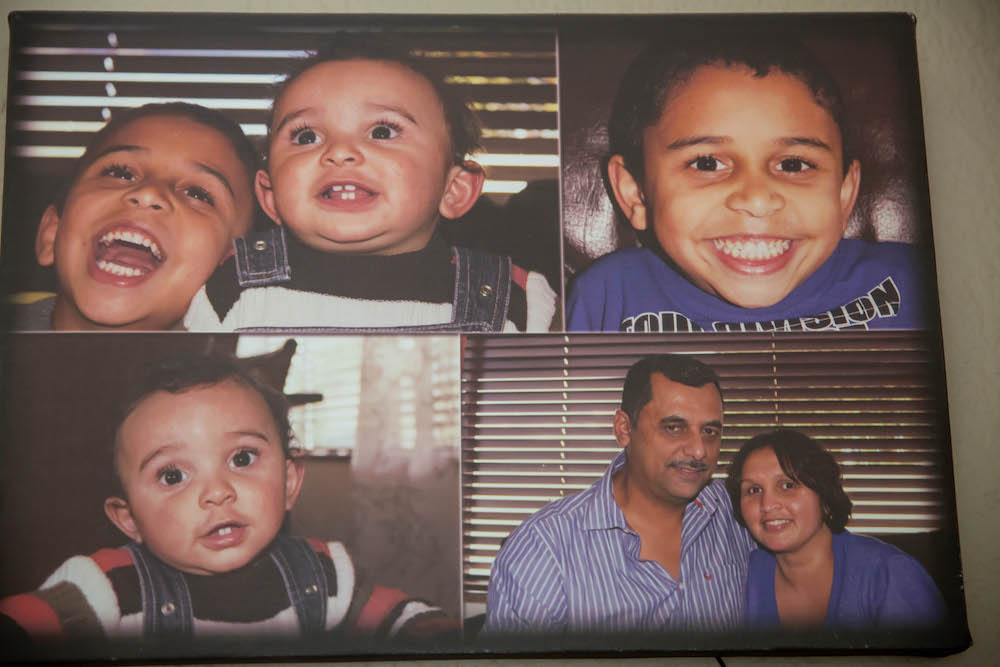 Shaney was told she could never have children, but she ended up giving birth to two sons  |  Photo: Ronelle de Villiers

In 2011, after I gave birth to our second son, Luke, my condition worsened. I woke up the morning after giving birth and I couldn’t walk. I had to hold onto the walls or walk holding the pram or a walking stick.

I worked for an IT company but, eventually, my husband asked me to quit my job and focus on my health as I was driving 60km daily. So, I’ve been working from home part-time for a while, assisting my husband’s and niece’s businesses on the admin side of things.

It’s frustrating that I can’t walk on my own anymore and am dependent on my family. Little things are hard, such as not being able to go to the shops on my own to get ingredients for supper. There are days where I get depressed or moody and ask, Why me?

But the accident also made me look at life differently, and hunt out the positives in life. The crash precipitated an asthma attack in me but there was a doctor driving behind us who saved my life. If it wasn’t for him I wouldn’t be here today. I believe God brought me through it. 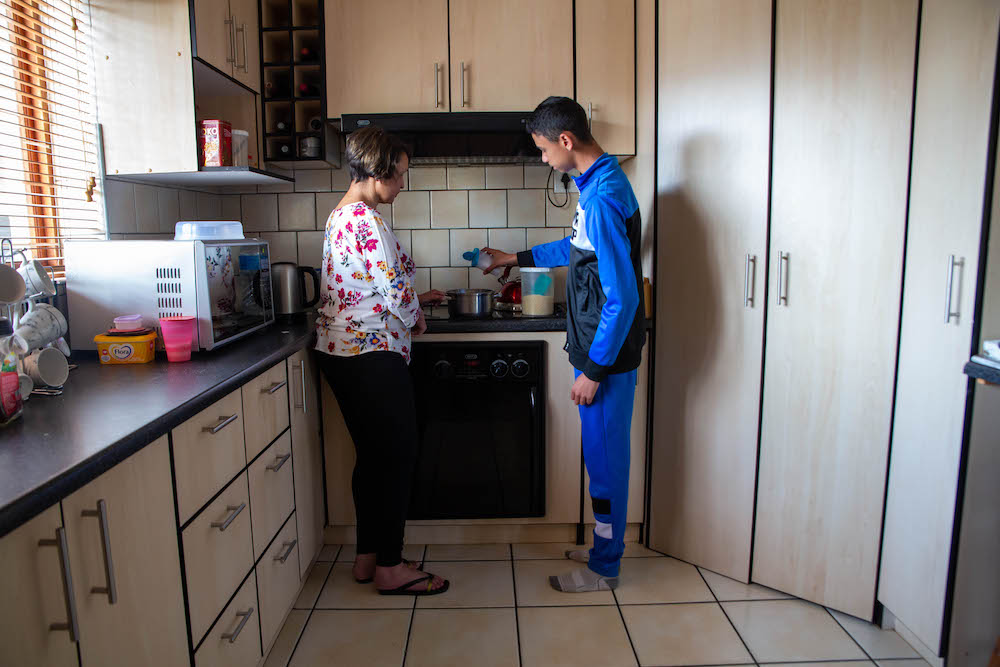 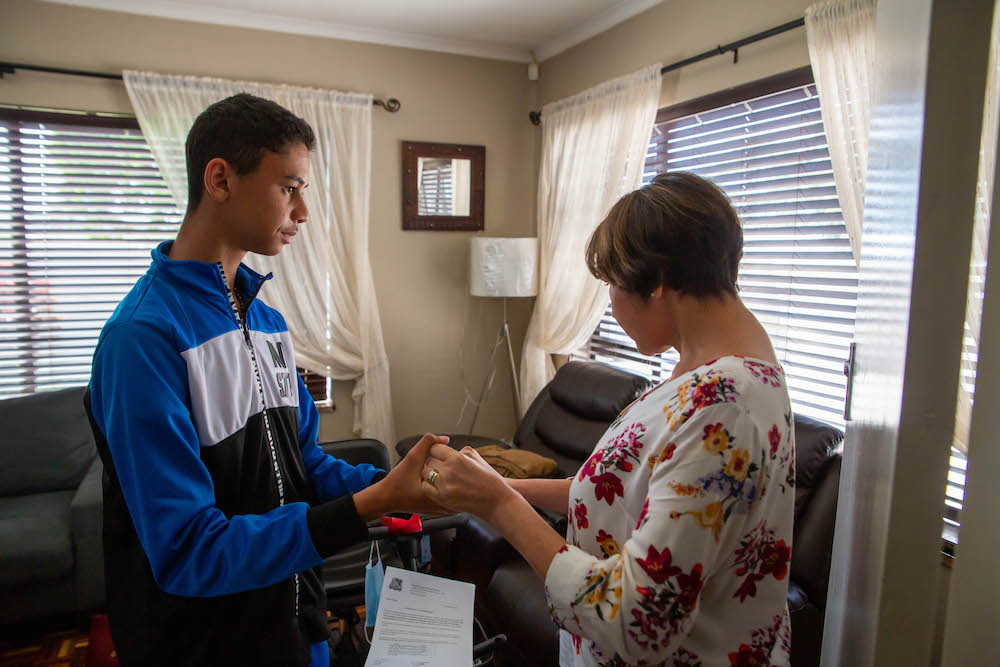 ‘My family are always there for me,’ says Shaney, being helped here by her son Jared. ‘I’m very thankful for them’  |  Photo: Ronelle de Villiers

Perhaps the answer to the ‘Why me?’ question is to learn gratitude and to get closer to God. I survived the accident, I have a wonderful husband and two beautiful boys who motivate me. There are still things that I’m capable of doing. I want and need to keep going for the sake of others. I know I’m going to see it through. I think I may be here on earth to motivate people: if I can do it, so can you!

I depend a lot on my family at the moment and am very thankful for them as they’re always there for me. My husband helps me with a lot every morning and brings me coffee before he goes to work. He tells me: ‘You’re not disabled, you’re just physically challenged.’ Jared helps me get ingredients for supper, and I still cook for my family almost every night.

I want to keep doing things for my family so, since lockdown eased, I’ve been seeing a biokineticist and am feeling stronger. My legs are moving better: it’s just that, because of my brain injury, the message to move doesn’t go through to my legs. Working on my laptop keeps me going and I move around in the passage to the bathroom with a scooter my brother gave me on my 40th birthday.

I grew up going to church, but it was only when I got older that my faith grew as I saw how prayers had brought me through my accident and helped me heal more than was ever expected. I connect with God through reading the Bible, praying or playing worship music, which uplifts my soul. 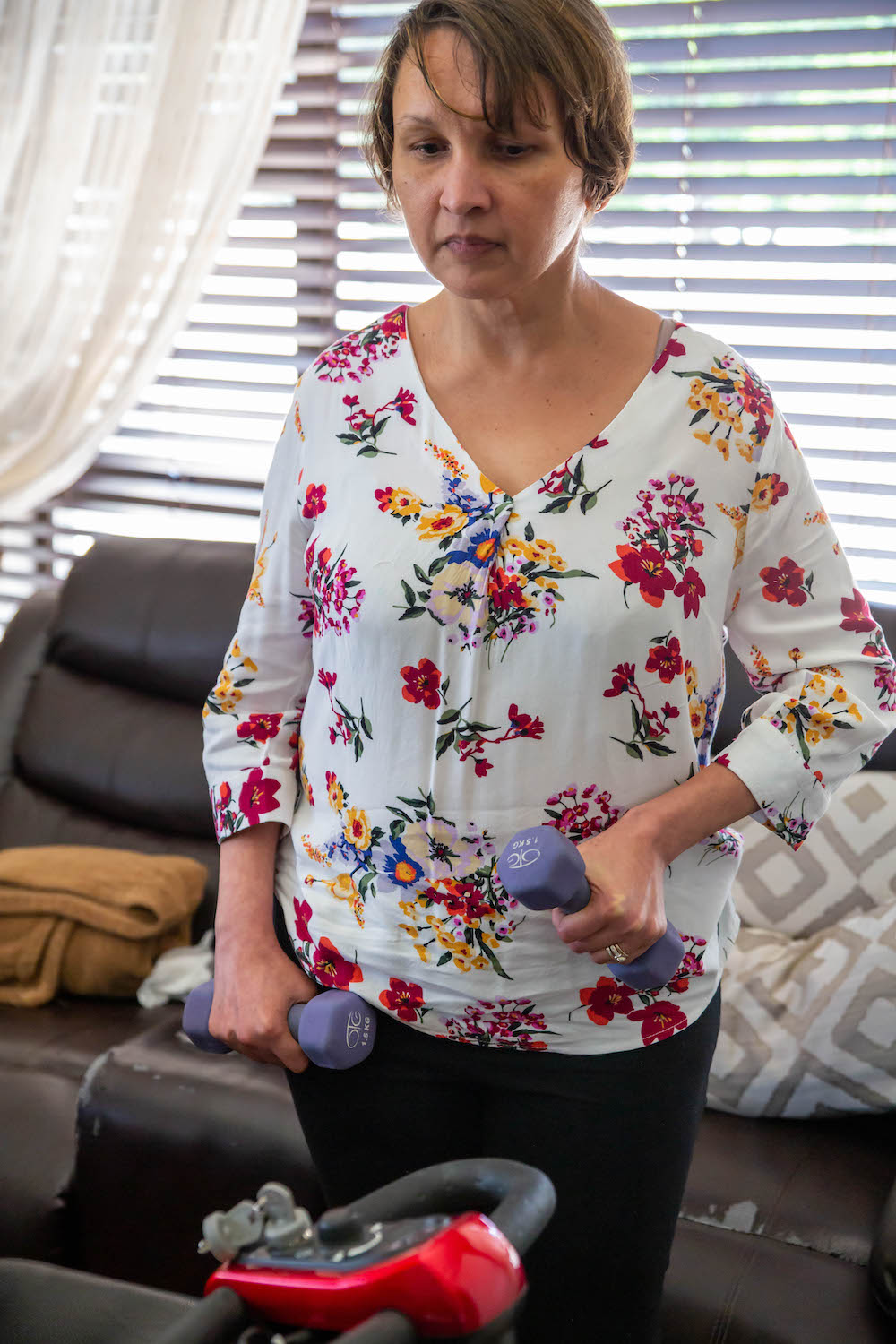 Shaney: ‘Being called a cripple hurt but I didn’t let it define me’  |  Photo: Ronelle de Villiers

It’s God and my family that keep me going. Every evening, I let my sons take turns to read the Bible and pray. A friend who also faces health challenges gave me a Joyce Meyer book. She’s very motivating with her message to never give up on people or your faith, not to listen to the naysayers.  At times in my journey, people described me as a ‘cripple’ or ‘paralysed’ and this hurt at the time but it got me to do better and I didn’t let it define me.  If you want something, you need to go and get it, dream big and persevere.

My advice to others is: if you’re struggling with a difficult life journey, don’t get stuck in the past and don’t give up. Join a group, try to be a better person and consider telling your story: it can help others. 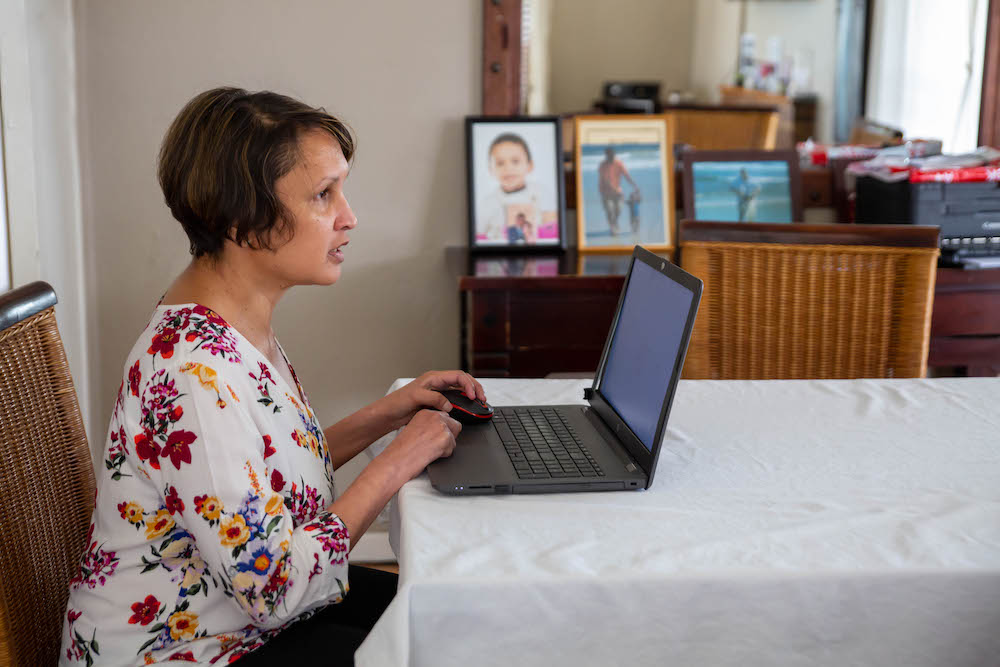 ‘If you’re struggling with a difficult life journey, don’t get stuck in the past and don’t give up,’ says Shaney. ‘Join a group, try to be a better person and consider telling your story: it can help others’  |  Photo: Ronelle de Villiers

I always used to think I was perfect. My life was perfect, my body was perfect. But look at me now… I am perfect in all imperfections. I realised I don’t have to look good for people but my soul has to be right from within.

Embrace your life with a passion! I love being with my boys, playing board games, watching a movie all of us together, or taking a drive. I get myself to look on the bright side of life. As the saying goes, ‘There’s light at the end of the tunnel’. And… God will get you closer to where that light is.’

It's time for some authenticity 😀 Here's a bri

How has a former estate agent's lightbulb moment s

If we have problems, we sit down, we discuss. It's