Plastic surgeon MARK BOUSTRED (60) was born in Johannesburg, South Africa, and educated at St Andrew’s, Grahamstown, and Wits University. He specialised first in general surgery then plastic surgery at Groote Schuur Hospital and Emory University, USA. After a career encompassing mission hospitals in Zululand and Lesotho and a professorship at Penn State University in the USA, he settled a few years ago into private practice in Colorado, where his passion is for transforming children’s deformities. He is married to Sarah, a South African midwife, and they have a daughter and three sons. Here he tells KATY MACDONALD how he coped with losing his left eye… 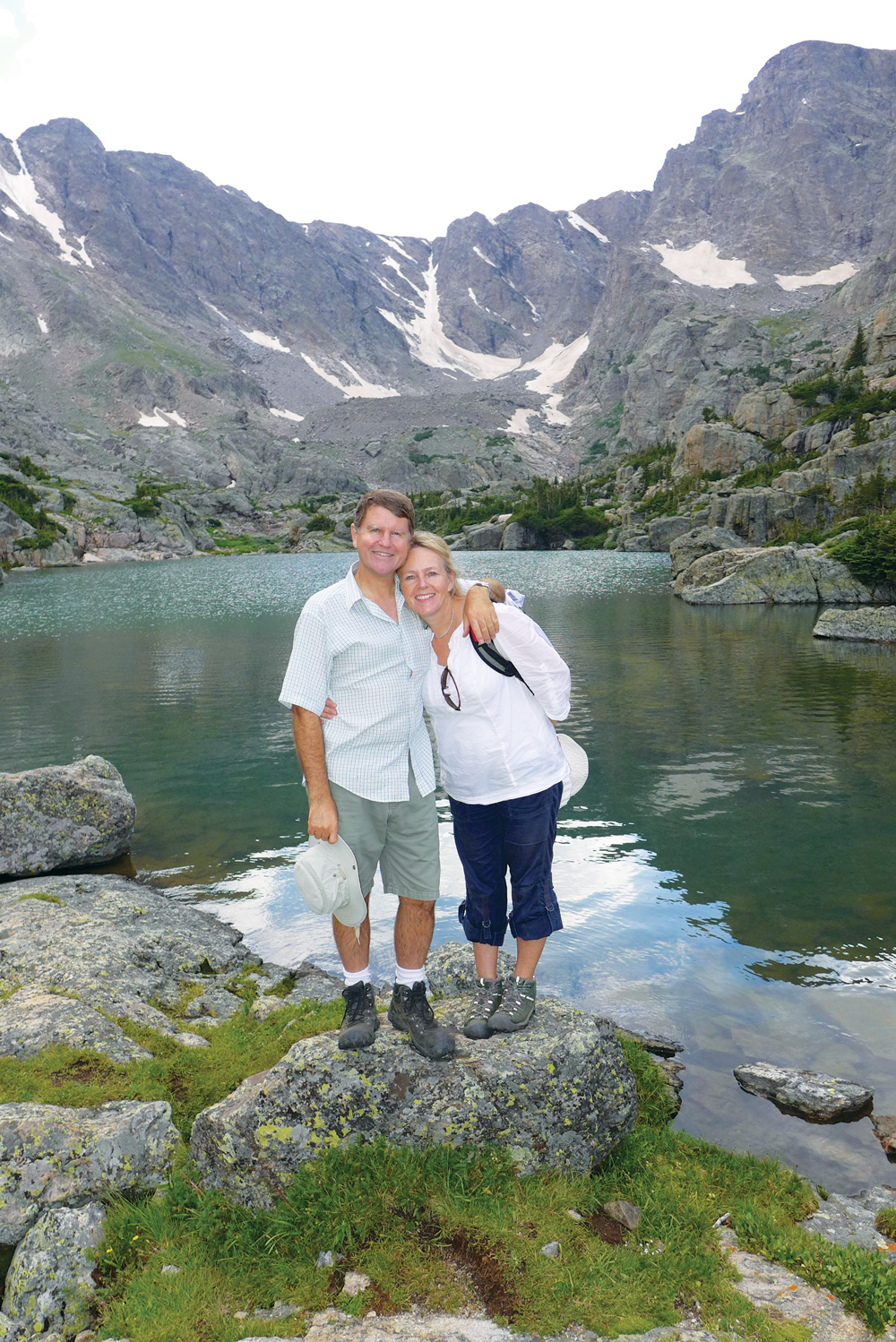 ‘It’s the tough times that grow us. A bunch of my rough edges have been knocked off,’ says plastic surgeon Mark who lost an eye in a freak accident

‘I’ve always had a passion for things that fly and used to make my own radio-controlled planes from scratch as a teen. Once I was old enough, I got my private pilot’s licence. When the kids were older I took up radio control flying again as it was fun to do together, and a great challenge for my ageing brain. You have to be a good repair man as they often crash, and one Saturday evening in January 2012, I was at home, changing a bunch of parts on the rotor head of my helicopter. Unbeknownst to me, the most critical parts, the blade holders, were faulty. I powered up the helicopter and within a few seconds one of them fragmented and the blade flew off into my left eye, smashing my glasses and rupturing my eyeball.

I knew straight away something really bad had happened. I could see the jelly coming out of my eye. My youngest son was first on the scene and I said, ‘Luke, I’m afraid my eye is totally screwed, and life will never be the same again.’  The thought that I might never be able to operate again and support my family, was foremost in my mind. For an immigrant to America with no safety net, this was a pretty dreadful prospect.

Sarah drove me to one of the hospitals where I work, with me clutching a piece of gauze over my eye. I remember the opthalmologist on call being horrified that he had to take care of a colleague with such a terrible eye injury. He left an urgent cry for help with the retinal specialist, who had just flown in from a holiday in Hawaii and came straight in his flipflops to the hospital. My eyeball was ruptured, lens and iris gone, cornea shredded and retina totally detached. Thus my journey began. Eight months and four operations later (including a corneal transplant), I could perceive light but had no useful vision. When I opened my eye, I saw a bright glare and flashing lights, and couldn’t go outside without sunglasses. Eventually, we decided the eye was more of a liability than an asset, and in August 2013 I had the old eye removed and replaced with a prosthetic eye. On the way home, Sarah managed to lift the mood: ‘Now I can finally go on a blind date!’ she said. What a ‘cornea’ joke!

We live in a smaller community and rumours spread fast that I was finished as a surgeon, but I felt God still had plans for me to care for people using my surgical skills. I built a radio-controlled plane as a kind of occupational therapy, and two months after the injury I resolved with much fear and trepidation to try working and operating again. My first day back in surgery I drove to the hospital in tears, saying, ‘God, I’m not sure I can do this. How could I be up to giving my patients the best care with one eye?’ But I felt God saying, ‘Don’t worry, I’m with you, it’s going to work out. My strength is made perfect in your weakness.’

For the first two weeks, one of my partners was with me whenever I operated. I told my patients, many of whom were in the middle of multi-stage reconstructions, not to feel they had to stick with me, but in fact so many patients stayed that I operated for eight hours on my first day. After the first day, my partner said, ‘You don’t need me, Mark’ and on the second day, my more perfectionist partner said, ‘I don’t know how you’re doing this!’ I said to him, ‘You know where my strength comes from.’

Physically, my life is different – I see a funny bamboo kaleidoscope pattern all the time, which is a bit of a nuisance, but there’s lots I can still do. Driving is okay, I just have to set my mirrors well and it’s a bit more tiring. Hiking was initially hard because I don’t have depth perception any more, but somehow that’s improved: I think I’ve started taking in other cues. I love to ski and still do so – I just have to be careful of people coming in from my left. That includes Sarah, who still hasn’t forgiven me for ‘playing dead’ when we collided on the slopes not long ago!

My colleagues and patients don’t see the difference between the quality of my new and old work, but I do. I have to concentrate a lot more now and have a less hectic schedule as I tire easily. Nonetheless, I really believe God enables me. I don’t deserve this from Him, but He’s done it anyway. My practice is busier than ever even though I don’t hide the fact that I have only one eye, and joke with my patients about being a one-eyed surgeon. But I’m also able to share my story with them and give them hope in the God who I believe is very real and wanting to be in our lives.

There’s no use in looking back and feeling sorry for myself. I try to keep looking forward and to make the most of things. This is what I have to work with and I’m going to do everything I can with what I have. I do think that when Jesus is in your life, he can change you to cope better than you could on your own. There’s a supernatural power that’s present, accompanied by his grace and his love and his kindness. An amazing thing that still chokes me up is that waiting for me to arrive at the hospital entrance after the injury was a former patient, a nurse on whom I’d done reconstructive surgery after breast cancer. She had a wheelchair for me and greeted me and said to Sarah, ‘We love this man, we’re going to take great care of him,’ and it was as if God had sent a little angel for me. After the surgery I woke up and had a total peace about everything, it felt as if Jesus had me in his arms, and so it has been ever since.

Sarah prayed and had a feeling I was going to get my sight back, but it hasn’t happened yet! However, the amazing thing is that I feel I’m truly a better person now than before it happened. It’s the tough times that really grow us. I’d been trying to follow Jesus for the last 40 years but it feels like booster rockets have been put on the trajectory of my spiritual growth. I have to be more dependent on God, and a bunch of my rough edges have been knocked off in the process.

Paradoxically, I’m less worried about the future. I’ve experienced how God has shown up and enabled us and I know our lives are in His capable hands, whatever the future holds. Our family has grown by having to deal with the whole scenario, and our kids have learned valuable life lessons. Jesus is more real and closer than ever. What compares to that? We can spend our lives chasing after material things and success and fame, but ultimately where do these things get us? We can’t take them with us! It’s who we become that counts. The bad things we run from can be the very things that grow us in ways that an easy life never does. God works for good in all the circumstances of our lives.

Corrie Tem Boom, a Dutch lady imprisoned in a concentration camp for sheltering Jewish people during the Nazi regime, said our lives are like a tapestry. When we look at the underside we just see a tangle, but on the other side is a beautiful image that God is weaving. I think my life is a little like that.’